Day 58 (7/20): I would like to first say holy shit your gas is expensive Canada. Second is I’ve ran into way to many old school gas pumps. The little white types with the chrome finish and the hose and handle on the side of the pump, then you go inside the store and the attendant runs outside to record the price and they have one of the modern credit card readers where you insert the credit card at the bottom to read the chip.  Just a weird mix of modern technology and 40 year old technology working together.

Second logging trucks, they just drive. They don’t look at the road. I will see one coming and move over to the edge and 5 seconds later they notice me as there plowing down the center of the road and quickly swerve over to not hit me.

I woke up this morning with a herd of cows surrounding me. But as soon as they heard me move around they quickly (as fast as a cow can move) took off into the woods. It was another great day of driving down logging roads. I drove about five miles of overgrown logging trail that looked like the only thing that went down it in the last few years. It was about a track and a half wide with small trees and bushes overgrown on each side. The only great views I had all day was where they clear cut the downhill side of mountain side. 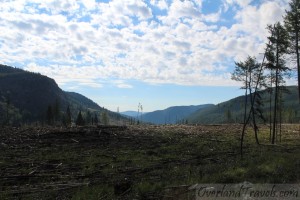 I also have an appointment Thursday to fix my trailer axle. So I’m taking my time to reach the town since I don’t want to arrive early. For a camp site tonight I found a little used logging road and pulled off to the side where there was a campfire ring made of rocks which is not very common. 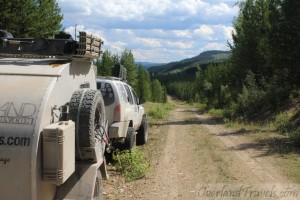 Day 59 (7/21): Another great day of driving through woods and mountain logging trails. I have to say Canadians are weird drivers and walkers. There not aggressive at all but they just go without looking. From crossing the street to pulling out onto a highway. 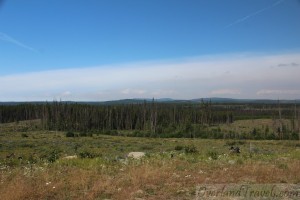 I also came across some nice lake views. The water up here is always blue. 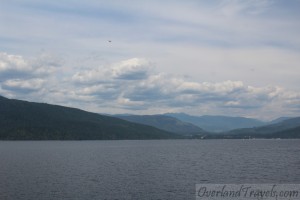 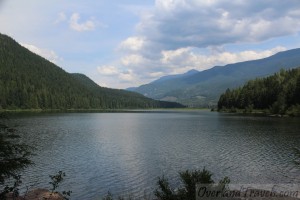 I also crossed over a bunch of small bridges with flowing creeks headed down the mountains.

The air all day was slightly hazy due to the forest fires going on around Canada right now. I could even smell it from time to time. I also came across a friendly firefighting crew. All of Alberta and British Columbia are on a campfire ban. 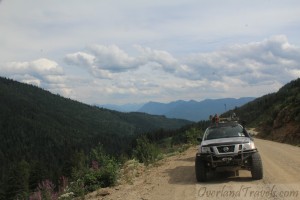 Near the end of the day I was driving on the edge of the mountain for a while. The drop was crazy. 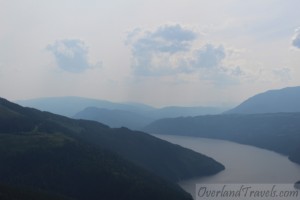 After a nice drive on the mountain edge, I came across this great camping spot for the night. It had a nice little opening with two campfire rings.

Day 60 (7/22): Before I get started I forgot to put my sdcard back in the camera again. So no pictures today and I had a few good ones. It was another day of driving on lumber roads going by lakes with the pine forest climbing up the mountain side. I have an appointment tomorrow to fix my trailer axle that I bent my second day into Canada. Near the middle of the afternoon I finally made it to a main road where I could head south to visit a fellow Xterra owner who setup the appointment for me. I drove the 100 kilometers south to Kamloops, BC. I arrived and Gordon and his girlfriend were extremely welcoming. We hung out for the rest of the evening just talking and it was extremely nice to get in a real shower and sleep in a real bed.

Day 61 (7/23): I woke up nice and early with the sunrise and today marks two months of me being on the road. After sitting around for a little while and talking. I headed to my appointment of the shop that will stay unmentioned. I dropped of my trailer and the only person that was there is the secretary. This was 2hrs after they opened. I headed off to do laundry. I realized one and a half hours after dropping off my trailer I realized I forgot to leave my lug nut spline. So I headed back and my trailer was still sitting there and no had arrived yet. I took off and finished my laundry and then went grocery shopping. I went to a pretty large grocery store and I have to say. I was surprised at the type of food they had. I could not find some of my regular things. After shopping I tried calling the shop and could not get through. So I drove there. My trailer was ready to go. I took one quick look at it and realized they did a mediocre job at best. They added a bend back to the trailer axle but did not fix the bends that were not supposed to be there. And did not straighten a tire back out. Essentially they did a Band-Aid fix and did not fix what I told them to and they also did not reinforce the axle as requested. I could tell they did not even remove the axle from the trailer. I negotiated down the repair bill and paid and then left. It was not worth staying another day and trying to get them to do it right the next day. I headed back to Gordons place and repaired a ground wire on the trailer. Then hit the road. As I am writing this I am sitting on a little traveled trail getting eaten up my tinny little natts.

Day 62 (7/24): I woke up this morning after a great night of sleep. And hit the trail. I went through some pretty old trails that were lightly used. Then I got on a one and a half track wide trail for the remainder of the day. I was rounding a corner and all of a sudden this RV was barreling towards me. We both locked up the breaks and swerved were we were each half of the trail into the woods. We both came to a stop when we were driver window to window. I then continued on at a much slower rate. After a few hours of driving I all of a sudden heard a huge clunk. I pulled off to the side. My trailer was sitting weird. I took a look underneath and both of the leaf springs were snapped. Since the trailer was still slightly drive able I drove down the trail until I found a wider area to pull off to the side. Luckily I brought a spare set of leaf springs. 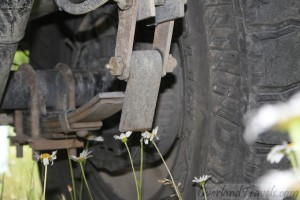 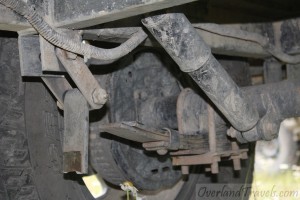 Two leafs in each pack were both snapped. I also noticed that my axle was cracked next to the leaf hanger and two and a half hours later I had the new set of leafs on. I continued down the road were I came across a group of ATVs I guess there is a rally this weekend. I asked them and they said there was a trailer supply store two hours down the road. I continued on for another hour to a small town and I’m not sure they have running water. I filled up at the gas station and they said they could weld up the axle in the morning. At least there is a nice little park with free camping right across the river from the town. 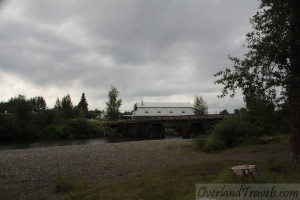 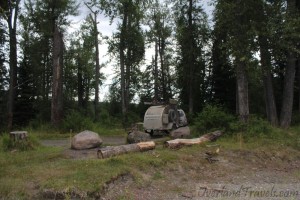 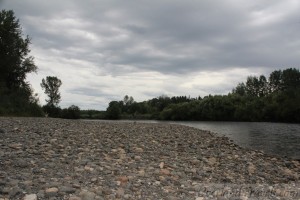 Day 63 (7/25): I woke up this morning feeling tired. I did not get much sleep as I was near a main road and not use to the sound. I headed to the gas station and talked to the young kid at the gas station/mechanic shop. He informed me they do not have a welder. I started my journey slowly towards the highway. I finally got cell phone service and reached out to the two nearest Canadians I know. I got in contact with one of them. And came to the realization due to the weekend I won’t be able to get any work done until Monday at the earliest. So I slowly headed back to Kamloops for the rest of the morning and early afternoon. Once I reached Kamloops I removed the axle so Monday we can just drop it off. The crack looks old but you can see it was progressing. It was a good thing I noticed it as it would of most likely left me stranded on the trail. As of right now I’m hoping to upgrade the axle to the next weight axle. It looks like a direct replacement axle will be easier to find though. This evening I went trail riding with a few locals on a fairly easy trail. It was nice to go explore and be able to talk to be while off-roading. It did start to rain and things were getting slippery. It was a fun simple trail in the end.

Day 64 (7/26): Today was a day of relaxation. Since everything was closed that I needed I just ended up watching TV and movies with my host family all day.